“Photographs are the images of history rescued from the oblivion of mortality.”
-Neil Sheehan 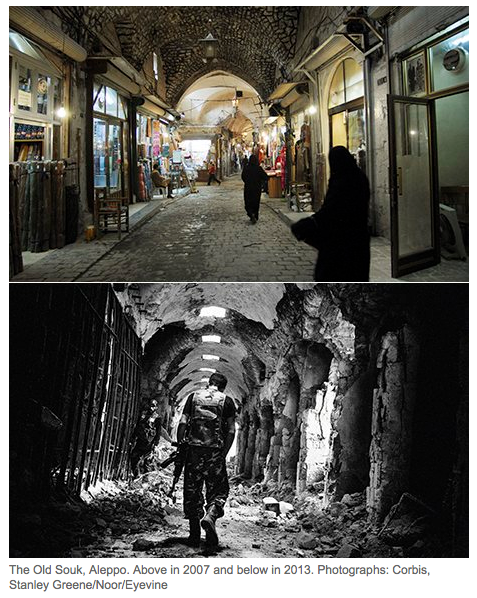 The toll of war in Syria has been unbelievably high. More than 4 million people have been displaced, 2 million as refugees into neighbouring countries and more 130,000 dead. I’ve lived my life in peaceful times and have been insulated from the high cost of conflict. There was a time when I entertained romantic notions of being a foreign war corespondent but I took a different path. My interest in how conflict is recorded and preserved, however, has not abated.

The Guardian’s Martin Chulov posted a piece (linked) about the toll of war on Syria’s heritage and the reason I’m sharing this with you is the before and after images included in the post. While there is no greater cost to war than human lives, the collateral damage to Syria’s history is heart breaking, and I can’t help but wonder if what will be left of Syria’s past is what is preserved by photos made prior to eruption into war.

Coincidentally, Monuments Men, a new film by George Clooney tells the story of a group of men, pressed into service in World War II, tasked to save the cultural artifacts stolen by the Nazis, is set to be released and I am looking forward to seeing it. Please have a look at Martin Chulov’s piece.

The Guardian – Syria’s Heritage in Ruins

I was working on a post earlier and will get back to it later I suppose, it features a few images I shot on the weekend of the 2012 Starbucks Run For Women at UBC last Saturday. As I was writing, and trying to collect my thoughts about what it means to see people complete their first 5 or 10 km race I found myself struggling to capture the emotion, satisfaction and exhaustion written across so many of the faces I saw that morning.

This is totally different! A link the the Atlantic’s In Focus Gallery, @In_Focus, came up in my twitter feed today with this remarkable gallery of images from the New York City Municipal Archive. Long before I considered a career in Photography, I studied history, receiving a Bachelor of Arts from the University of Victoria in 1999. I didn’t often get to sort through historical photos, but I relished any chance I got. I love seeing places I recognize in a fully different context, I love the differences and I love seeing what remains after the passage of time and human development.

What is most remarkable about this gallery are the images that also link to Google’s Street View to reveal their modern incarnations. If you love NYC, or old photos have a look and check out how these scenes appear today. I challenge you, however, when looking at these photos to consider them not as just images of our history but for the people captured in these frames, at the moment they were made, it is the apex of their modernity.